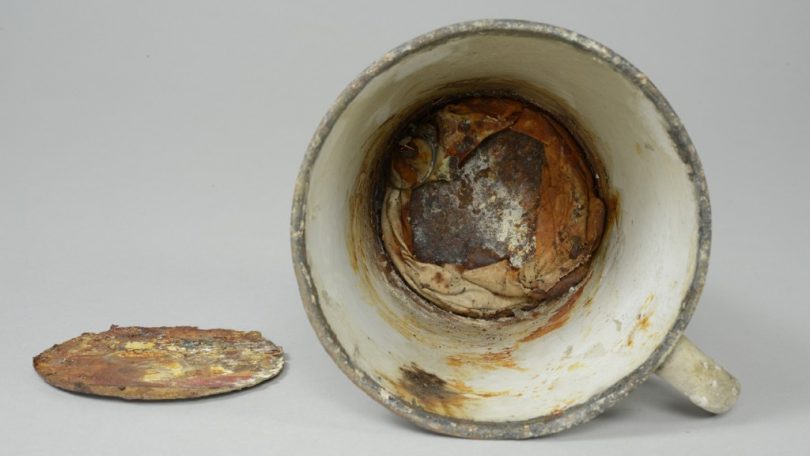 The Auschwitz Museum has thousands of mugs as part of their collection. From the outside, it looked like any of the other mugs in the Auschwitz museum. But when the staff cleaned a 70-year-old mug to add to the exhibition, it turned out to have a false bottom. Hidden inside the base of this mug was an extraordinary secret that was so well kept it was only discovered now.

Around 1.3 million people were deported to Auschwitz during the Second World War. Nazis often told those that they deported to concentration camps that they were simply going to live and work there. That is why they took their luggage and most valuable belongings with them on their journey. But upon arrival most Jews were killed immediately. More than 1 million prisoners, mostly Jews, died at Auschwitz during the Holocaust.

The Nazis confiscated the personal possessions of the deported immediately upon arrival. The vast majority were just utensils such as kitchen stuff and linens that are now on display in the museum at Auschwitz. The huge number of mugs is a small reflection of the huge number of people who lost their lives in this dreadful place.

When museum employee Hanna Kubik cleaned the mug, she discovered a long-kept secret. The mug turned out to have a false bottom and the owner had hidden something underneath. Hanna discovers a bundle and carefully pulled it out of the mug. When she opened the bag, she saw what the owner of the mug tried to hide from the nazi’s. A ring and a necklace had been well-secured under a false bottom for 70 years. The necklace had been carefully wrapped in canvas before being hidden in the cup.

A glimmer of hope

The mug tells a moving story. The owner believed the lies of the Nazis about a new home and workplace. That is why the mug and the jewellery were taken on a trip. But there was also suspicion. And this is the reason the owner hid her most loved belongings in the false bottom of the mug. She clearly didn’t want to lose them. Because she had hope for a life after Auschwitz. It’s a heart-breaking reminder of how much people didn’t know about the fate they faced at Auschwitz.

After the jewellery was examined, it became clear that they were made in Poland between 1921 and 1931. The special false-bottomed mug is exhibited in the museum along with the jewellery. The museum says that while every find is “carefully documented,” it is often impossible to connect a personal item to the victim who owned it because of a a lack of identifying characteristics.